Long time since last post.. things have accumulated in such fashion that I’ll have to do this one braindump.

First off if someone was wondering the weird Turkish pages that replaced all index-pages on sokkelo, the reason was that our webhosting provider was hacked by some Turkish script-kiddies (damn kids). Apparently they got in via a hole in their software (not a direct attack against sokkelo). Luckily only index-files needed replacing.

Secondly I’ve posted my first processing experiments here in case someone is interested. The sketch in question takes photos via the webcam and allows you to draw over them with a laser pointer (or mouse, if you can’t project the image anywhere). Kinda works like the Graffiti Research Labs Laser Tag system except we don’t do perspective correction and they don’t do photos. The thing was used in our official MLAB-party that kicks off our studies in HelsinkiMediaLab. Our Flickr MLAB-feed is now cluttered with “art” created by people at the party (we had automatic flickr uploading through a python script). 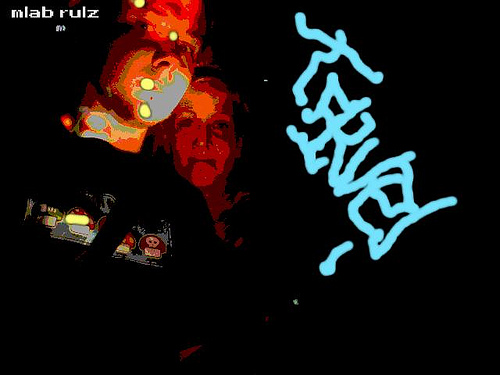 Other articles in coding

Other articles in graphics

Other articles in release